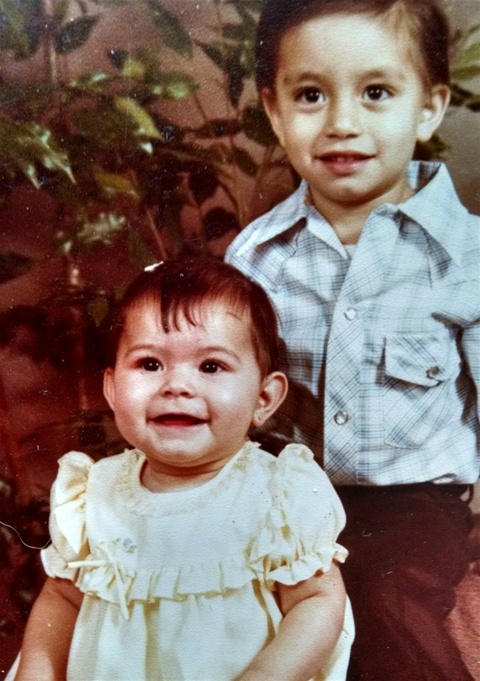 Hi everybody out there!

Today is Friday, I hope everyone has the weekend off. I don’t!

I want to just jump back to where I left off previously with my tale. I have so much to add to the story, but time and space is limited. Im trying to keep the post at a reasonable length as suggested by the EXPERTS, so as not to ramble on and on with too many details. Please let me know if I need to adjust for your benefit!

Now that I had failed the test to qualify me for employment at the ship yard, I was out of ideas as to what to do next. I didn’t really have a plan B or any means to create one. We didn’t really fool any one trying to conceal the pregnancy from our families and the clock was once again ticking for Dora and I. She was in a desperate disposition back in Tucson and I had no other option but to work with my sister at McDonald’s again. I knew that I couldn’t follow the same pattern as before with the first baby, and now being 20, I was not going to get a pass from anybody anymore. I had to ‘Man-up” and take responsibility for my actions. But how? Working at McDonald’s for $4.35 an hour was not going to afford me any kind of livable wage. Especially with two kids now. To their credit, my big sisters took charge. One there in San Diego and the other one who was now living in Phoenix, with her new husband.

My sister Angela, who was always, and still is, my closes sibling and two years older than me, offered to take us in. She and her husband lived in a large four bedroom house, three of which were empty. I called Dora and told her about the offer. She immediately said yes, but feared telling her parents. Since they had become very much attached to Anthony and still had their doubts about me. She suggested we elope on a day they would be out of town, to avoid a scene. We picked a day and coordinated a plan with my sister’s help. Dora was so excited. She was finally going to get her wish of a united family.

For my part though, I was still a bit apprehensive about the whole scheme. Even though we had reconnected as a couple, and my feeling for her had resumed, a part of me still held back a total commitment to the cause. I silently viewed the endeavor as an experiment, on a trial bases. If things didnt pan out, I figured, we could just go our sparate ways.

On June 23rd 1982, I took the bus for the last time to Tucson. As it turned out both my mother and her parents were out of town for the weekend. My oldest sister picked me up at the station, and took me to get my mom’s car for the trip to Phoenix.  Neither parents knew of our plans, but both already knew of Dora’s pregnancy. It was hard to hide a seven month belly! They were just waiting for us to come clean. But eloping was not what they expected from us.

At 11 pm. I hugged my big sister good bye (I have five) with tears in my eyes and picked up Dora and 26 month old Anthony at her house. We had nothing to start a new life with, except for a few bags of clothes and $85 she had saved. But we had help from my sisters and a fresh start in a new city. And we had each other! It was quite a ride we had traveled since we first made eyes at each other that afternoon coming home from the track meet.

My sister and her husband both greeted us warmly and showed us our new rooms in their two story house. It was an exciting yet nervous time for the three of us. Especially for little Anthony. He was ripped from his environment overnight, and missed his grandparents tremendously the first few weeks. I quickly got a job at, you guessed it…McDonald’s! Meanwhile Dora got on welfare and food stamps. We felt very comfortable there and after the anger and resentment subsided on both sides of the family, everybody was happy! Dora’s parents were especially grateful with my sister and her husbands for taking us in. My friend Tony sold me his old lowrider for $400 and that became our first family car!

On August 14th of that year the world welcomed my one and only daughter! Vanessa Bayardo Romero weighed 8lbs, 15 oz. this big, beautiful, happy child was now ours to raise. She was all smiles, all the time!

When I saw her being born, I cried. I missed my son’s birth, and much of his first two years of his life, so I was determined not to let the something happen with my little princes! Something in me also changed with that event. Leading up to the final trimester, I was really enamored with Dora. She radiated through her pregnancy and I couldn’t help but draw closer to her like never before! It even surprised me.  Finally all the doubts and reservations about our ‘Experiment’ just floated away. I realized how much I really loved Dora and how much she loved me. I was finally ‘all in’ with this family!  Naturally the next step was to wed. We couldn't live in sin, now could we! Ha-ha! So we planned it.

On Nov. 4 th 1982, we exchanged vows at the Maricopa county court house. We both were so elated, but more so my new bride. She was the one who persevered and never lost hope that this day would someday arrive. It truly was what she wanted and now she had it! We had a small gathering at the house with the families and even my father and hers shared a few laughs! Life was finally shining on all four of us, we felt. The only way to go was up!

Dora went to work at another McDonald’s while my sister helped take care of the kids. She was at home pregnant with her own baby on the way. Meanwhile I started a better paying job as a waiter at a nearby Mexican restaurant.  We both worked hard and saved our money for an eventual place of our own someday.

Eventually the character flaws started to appear. The reality was that neither of us was well groomed to be married or to raise children at that age. Aside from the age factor, imagine a soldier being sent to the battle front without boot camp or basic training. I was, to put it mildly, ill-equipped to handle being a good husband and father to my new family.  Learned behavior was all we knew. We, or I were not really taught nor shown how to be good adults. We simply were just told to: ‘Behave’, ‘Be good’, ‘Be responsible’, ‘Be considerate’, and ‘Be kind and loving’ and so on. But rarely did we see it in action.

Although her parents were solidly united, and have been married up to now, Dora still had her share of dysfunctional traits. Her father was also an alcoholic and she grew up emotionally deficient. We quickly started to learn about each other’s faults and clashed over many issues, like the kids and money. We fought as passionately as we loved. And soon started to take account of injuries we caused each other emotionally.

I was not succeeding in breaking the cycle that my upbringing had saddled me with, even though I often blamed her for most of the troubles we were experiencing. Still in my mind, as long as I wasn’t a drunk or wife beater, like my father, I was doing well. I was only kidding myself.

In more rational moments, we attributed our friction to being house guest.  After almost a year in my sister’s house, we felt that our own space was what we needed in order to flourish as a couple. We appreciated the hand up from our family, but now we needed to spread our own wings. But would we be able to overcome the real challenges we were about to face as a husband and wife, and as parents of these two beautiful children. Time would soon tell.

Stay tuned for more of my black and blue saga! If you wish. Sunday I will resume my story.