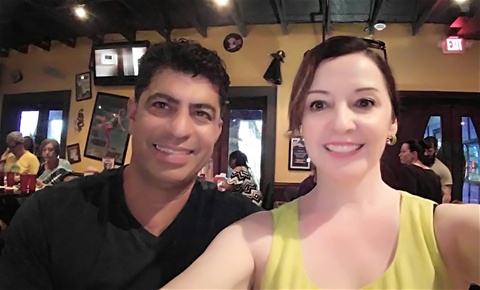 I hope all are well, wherever you call home, realizing that severe weather is causing problems in some coastal areas around the nation and that some have a few tough days ahead of them.

I’m sorry I haven’t written in a few days. The reason being, I was saving it up for a special day, as in the Today Show! I spent most of the day in Manhattan and Jersey City. I had mentioned earlier that I would go as a tourist for a day, saving my gig for one the outer cities like Rochester or Albany.  The timing of my visit of course had something to do with a chance to take a photo op with the beautiful anchor Savannah Guthrie, who hails from my home town of Tucson.  I met her many years ago through my sister Angela, who worked together with her at the local NBC affiliate.  My sister the videographer and Savannah the young reporter, covered many local and state stories, back in the nineties. I used to visit the station and crash some of their wild media parties when we were all younger and foolish. I have a few stories, but a good writer/reporter never reveals his sources!

Last Sunday we sent Mrs. Guthrie an email, letting her know that the Gigs guy was going to take a big bite right off that ode apple! My sister informed her that I would be at the Today Show concourse on Thursday or Friday.  As I was sleeping in my tent at 4am in the morning the next Monday, I received a message from Savannah’s assistant, asking me if I could be at the concourse at six-thirty am to record a shout out, they call it, for the opening sequence. The problem was that I was 90 miles away and committed to work until Wednesday with Chris. They missed the minor detail about which day I would be in the city, so I asked her if it would be alright to meet on Thursday. She said it would be fine, but to make sure I was on time. That proved to be the challenge for this small town, traveling, gigs goofball!

By yesterday evening I had worked four full days, including Sunday. I was beat. Now I had to get up at 3 am and drive the 78 miles to Newark, NJ from my campground to catch the five am Amtrak into Manhattan. I set my alarm but at ten pm I was still awake making preparations. Exhausted, I overslept until 3:39. For a few minutes I contemplated not going, wanting to just curl up in my one man, polyester cocoon! I’m too tired, it’s too far and on top of that it was raining, I reasoned.  I also traveled too far to pass up on an opportunity like this, so I found the fortitude to walk to the camp showers and get dressed. I'm glad I did, although it wasn’t an easy trip. I left knowing I had to make up time on the road and those Pennsylvania and New jersey country roads wind and loop like a rollercoaster ride in the dark those first forty some miles. I reached the Newark Penn station at a good time and after parking the Gigs mobile at a garage, I ran into the train central. That’s when I really felt like a fish out of water. I was overwhelmed by the process. It was 5:23 so I still had time to get there on time but I was lost as to which train, bus, or light rail to take? Maybe because I felt fatigue or frustration from running behind and feeling like it took all I had just to get to that point, that the posted schedules just looked blurry to my weary eyes. The information booths were still closed and no one looked friendly enough to ask at that time of day. I scurried up and down the three floors and countless doors and gates looking for the right place to purchase a ticket and find the correct path to my destination. The minutes were ticking away and I felt a bit defeated by the moment. I finally asked a security guard who was kind enough to guide me to the proper gate.

By the time I bought my ticket, sat in my seat and felt the train roll away, it was obvious that I would not make the 6:30 recording deadline. I was plenty frustrated with myself. I texted Maddie, the assistant, that I was running late and she told me to let her know when I got there. The sun had just risen but it was still raining when I surfaced in the NY Penn side of the Amtrak station at 6:27 but I was still twelve blocks away from 30 Rock! I followed my navigation on my phone and began to run! I knew that it would be the only way I would be there by the shows 7am start time. Apparently running in downtown Manhattan isn’t such a big deal, everybody is in a hurry to get somewhere in that town!

I showed up sweaty and wet from the rain but on time. The crowd was big so all the good spots were already taken. A bit disappointed by missing my opportunity to record my shout out, I decided to make the best of the situation. I texted Maddie that I arrived even though I felt I was too late for any special treatment since the show was now under way. The show’s producers are well in control of the scene both in and out of the set during the whole shoot. They informed the crowd that the host would do three outside shots, at 8;30, 8:45 and 9:00, so extra applause and energy would be appreciated. I thought about leaving at that point, thinking I was in no mood now for cheering.

Then Maddie texted me and asked where I was standing and what I was wearing. She said Savannah would take a picture with me at the second appearance, I was delighted! But I was way in the back and trying to position myself closer might start a fight with those devoted fans, who stood every inch of their ground with their signs and own personal attention getting schemes! Ah, but they didn’t have a chance against the Gigs guy today, it was my time to shine!

Out of the rainy haze and sea of umbrellas, Maddie pointed me out in the nose bleed section, parted the sea of humanity like a modern day Moses and called me forward to the front of the railing, much to the shock and dismay of the jealous onlookers!

WTF! Someone uttered from the soggy peanut gallery as yours truly strutted to the front row like a middle-aged, Tommy Hilfiger, run way model! The ladies next to me asked who I was and why did they moved me forward? I simply told them:  “Savannah and I are tight, from way back in Arizona.” That impressed them I guess. Minutes later the cast made their presences and the rest is now history! Savannah came over and we chatted for a few minutes, as she posed for a few pics with the Johnny man. Even Al Roker stopped for a pose. I was the only person she took a picture with, so that made me feel like it was all worth it after all. Never give up, no matter how difficult or useless it may seem at times. In the end, I walked about the city a while, ate, and took some picture for the website. Thanks to my sister Angie, Maddie and Savannah for making it happen. I hope to return as a real guest once I complete this journey! God willing.

Despite all the fun I’ve had this day; my heart is a bit heavy for the millions in the path of Hurricane Hermine, due any hour now in the Florida gulf coast. But especially for my good friend , #Yo-Ga-in the Fla. Take care and hunker down, my thoughts and prayers are with you.

Thanks and good night!