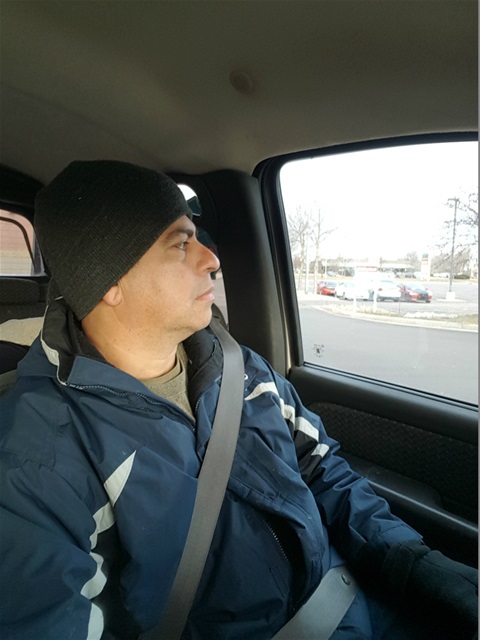 A happy and warm Thursday is what I wish you this afternoon wherever you may be. I write today from the downtown Des Moines PL here in frosty Iowa. I arrived here last night from Sioux Falls and was rescued by the Day family, Beth and Kevin, from another night of sleeping in the gigs mobile in another freezing truck stop parking lot.

Truth be told; this has been one of the hardest post to write since I started this journey back in May. If you have been following my adventure from its inception in Arizona, I always find a silver lining in every gig, stop and experience. It has up to this point been everything I imagined it would be and more, aside from a few hiccups along my path. That being said, my last six days in South Dakota were by far the most frustrating and stressful I’ve encountered of all my thirty-seven stops. Aside from the extreme weather conditions and poor job situation, I tried the best I could to stay positive, but let me tell you it tested my resolve to its limits.

I never attribute any success or failure, any experience good or bad to any particular community, state or region. As far as the good people of Sioux Falls were concerned they never knew of my existence or adventure happening right under their nose. But all it took was for one bad apple to make my struggle even more difficult and left me with such a bad taste in my mouth that I had to wait a few hours before I could sit down and write my blog without including a few expletives in both languages! Let me explain.

After four days of sitting around and doing nothing  and then sleeping in the cold, I decided to post my own ad in the local CL. I had done  it a couple of times before, once in Utah where I had success and a few other times when finding work had been difficult, just a basic post offering my skills and services to anyone who might be in need. On Monday night I received a response and as you can imagine I was thrilled after four days of nothing. The person, and that’s as kind as I will be to this guy, texted me if I could help him with some drywall the next day. I agreed and he told me he would call me the next morning for details, I was ecstatic and went to sleep cold but relieved to finally be hired. I even posted my standard update on my gigs page.

By 9:30 am I was having my coffee and yucky Micky Dee’s breakfast waiting to hear from this guy. He sent me a text saying the basement was locked and that he didn’t have the key. He told me to sit tight and he would get the key at lunch time. I sat at the McDonalds until 1pm and finally texted him whether the job was going to happen or not. He apologized for the delay and said he never got ahold of the owner. He asked me if I would be available the next day and if I would be interested in helping him with some other job just in case he couldn’t get any keys. To get some kind of reassurance I asked him to give me an exact time and location for the next day. He told me to meet him in the morning at the Home Depot, that he would call me early with the time to make contact.

After five days of agonizing frustration and fruitless efforts to score a job by any means; what choice did I have but to be optimistic and cheerful with him?  Shit happens I thought and he still reached out and offered me another opportunity to work. Despite my weary condition I prepared myself mentally and emotionally for another day and I still felt like my patience and endurance would eventually pay off in the end, it had for thirty some states and it would again I believed. My trust in people and what I’m doing hadn’t failed me, abut it would prove to be an eye opener when all was said and done.

At 10:30 in the morning I sat in my idling truck with the heater on trying to stay warm while I waited for this dude to call me, a call I’m still waiting for as I write you. Maybe because of my fatigue or desperation I tend to be a little cynical but this #*!3-@! never had any intention of hiring me I believe. He saw my ad on the CL along with my Arizona area code and decided to play a cruel and heartless game with a stranger he knew or cared anything about. I can’t prove it folks and maybe I am out of line but I can’t come up with any other explanation. I could pick up the phone and call him and say a few choice words and probably get my anger out and pour out my feelings of the last six days but the satisfaction would only be temporary. I don’t and have never begged for work from anyone and I’m not going to start now. I rather move on and try South Dakota from the Rapid City side in a few weeks than spend another day in Sioux Falls.

By noon it was obvious that he had just played me like a fiddle and probably got a big laugh about giving me the round a round for a couple of days, while I spent what precious few dollars believing his lies and false promises. He will never know what he put me through and the deception I feel for having my time, energy and hopes wasted on such a needless foray. I will tell this kid that the next person he decides to jerk around might not take so well to his little game as I did. I will turn the page on that episode and will assure you that my trust and hope of the kindness and goodness of people, even in Sioux Falls, is not one bit shaken by this event. I will move forward and score my South Dakota gig eventually and all the bad experiences of the past week will be a faded memory in the end. Well that is all I have to say about that, I hope I didn’t offend anyone.

Now I have the Day family and Iowa to keep me busy as I continue on with my journey. be sure to check my gig album #2 for my lates pictures. Thanks for your time, support and well wishes from the bottom of my heart. Have a great day!  #Yo-Ga-Fla