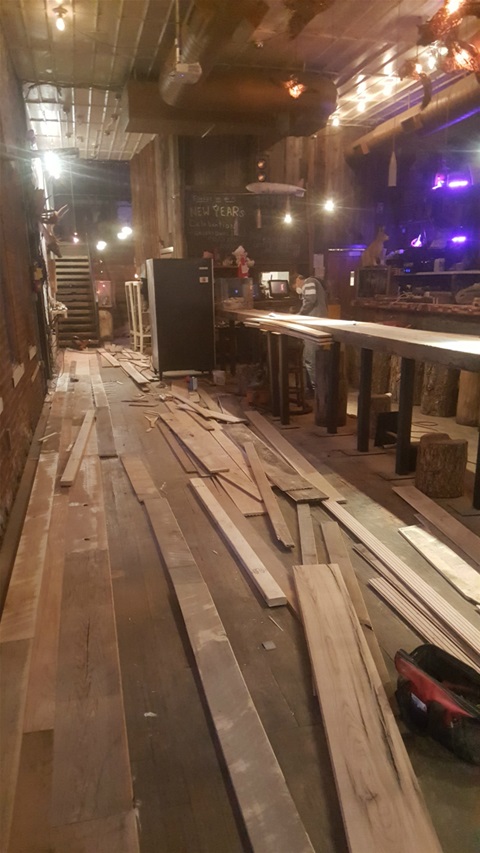 Good afternoon to all wherever you may be this last Thursday of 2016, I am still in Denver writing you from the downtown public library.  My apologies for the delayed update but as you have probably figured out by now it usually means I was busy working these past few days. And working my butt off well into the late night with just enough energy to roll in the Sapp’s truck stop and curl in my back seat for the night. The work is not an official gig since I’ve already did that on the twenty four, it is however a much needed supplemental job that I scored just in time to pay some upcoming bills.

The work I also found on the CL near downtown to help restore a bar restaurant. The challenge with this job and there were a couple, made for a stress filled three days. The days were long consisting of 11, 10 and 11 hour days, mostly on my knees or on the saws installing a new natural wood floor on the hundred plus year old building. I was hired by Tomas the owner who had an array of other items on his remodeling list long with the flooring. He also hired a slew of other Craigslist fellas to help him with the project, pretty basic remodeling stuff but the issue here was the timeline.

The boss had a window he was shooting for and the pressure and stress of hitting that mark would be the major factor and cloud that hung over me and most of the guys on the site. He contracted the main installer Elijah and I was hired to assist him with the floor but I still helped do other minor detail items throughout the time. The job in short is very meticulous and time consuming on a normal schedule or a clean slate floor but when laying it over an existing surface and ancient structure, coupled with other tradesman trying to carry out their own assignments it just made for a trying situation for me. as a contractor myself I’m used to organized chaos and  bench marks to guide a project to completion regardless of the deadlines. But as a hired hand which I have now grown accustomed being these last eight months, I have to constantly take a step back, keep quiet (which in its self is a tremendous challenge for the Johnny Man) and let things just play out without adding another voice to the decision making process.

To add to the situation I wasn’t feeling all too well, suffering through another cold and probable sinus infection to sap my already depleted energy levels. As the time passes my physical reserves are starting to be the elephant in the room which stare me right in the face every morning I get up and look in the truck stop mirror. I tired not from this job, nor from the last one; I’m just exhausted period. I’m tired from the miles, the bad food, and the lack of quality rest which now is taking its toll on my half century old body. It takes every ounce of effort and self-pride to show up to work ready to earn my money, only to pay for it later that evening. I’ve never challenged myself physically at this work level before and not since my high school cross-country and track days have I felt so burned out before. A hot shower and a hot meal gives me a little relief and helps me recover some for the next day but the journey still will take another eight or nine weeks I predict.

The good news is that although the body may suffer the wear and tear of the road, elements and working conditions, my mind remains strong and determined to press forward to the end. Speaking of high school, my old coach Castro from Pueblo high, a state champion runner in his day, always tried to push us to our fullest potential as individuals. He recognized each of our abilities and urged us on to fulfill our talent and endurance to the limit. He would get frustrated with me when I would complain about pain and soreness throughout the season. I would never prove to be more than just an average runner but he always felt I could do better if I was mentally tougher, something he always pointed out to me for the four years he coached me. I didn’t get it then and it took years to figure it out and as he said: “The body can do more than the mind thinks it can, you have to push your body and ignore all the pain and desire to quit if you want to be the best you can be. That is what all the champion master, mind over body.” I never got it as a runner, but now i try to use that mentality with everything in life, especially when I experienced trying periods in my own personal life. Thanks coach, you were right; I just didn’t see or understand it at 17.

In the end Elijah and I got the floor in with some added help from Billy and Jorge and it looked great, a day later but Tomas understood. I’m not sure how much longer I’ll be in Denver, I like it plenty and there is lots of work in the area but the real winter is at the door and I must move on. My next stop is Wyoming and then another try at South Dakota.

Thanks for checking in and I hope to post sooner than later next time. Thanks for your support and continued encouragement. #Yo-Ga-Fla!