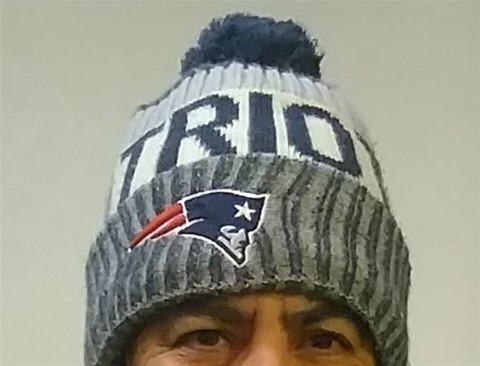 greetings from sunny, and boring Arizona! I hope all are well this day after the Superbowl. I apologize for the delay with my post, but I had intentionaly held back writing you, I figured, until the big game had ended last night. Unfortunately for me, my beloved Patriots lost the biggest game of the year in a wildly exciting game, with the now World Champions; the Philidelphia Eagels!

My sister Angie, son Johnny, and cousins came over to watch it with me and Kalani, and eat some of my world famous babyback ribs. I worked most of the morning on my Gigs second edition novel, and cooked most of the afternoon, until kick-off! Johnny is a huge Patriots fan, cuz that's the way he was raised, of course, but the others just came for the beer and food! And that of course is fine too, since the Superbowl has become such a enormous event, that one does not even have to like football, to enjoy the event. The party atmosphere it creates in America and beyond, has made it like a national holiday, even if your team isn't playing.

The network, and the advertising and corporate world make out like a bandit with all the commercial spots costing millions per minute. Most of the spots are just so-so I think, but there are a few creative commercials that standout each year. This year my favorite one was the Dirty Dancing re-creation with the Giants players!I know there are folks who just tune in for the ads. As the long and boring halftime show went on, with some kid named Justin, we all slammed down ribs, ranch beans and pasta salad. We got so full with the snacks and dinner, my cousins fell asleep soon after.

So as the game went on, the outcome was in question until the last minute, as all the New England superbowl games seem to go. Johnny, Kalani, and I were so nervous, I felt my dinnner come up to my throat a couple of times! Finally the football gods shined on the Eagles this year, and they won the contest in one of the most thrilling games in Superbowl history. Johnny went home sad and Kalani and I cleaned up the mess. I was so bummed out, I didn't have the desire or energy to sit behind the computer and post my story afterwards. I sure if the Pat's would have pulled off win, I might have had no problem writing a victory blog post! I guess there is always next year!

Well friends, have a wonderful week. Stay safe, warm, or cool in this wacky weather, wherever you call home. I thank you for checking-in again; you are the reason I do what I do!