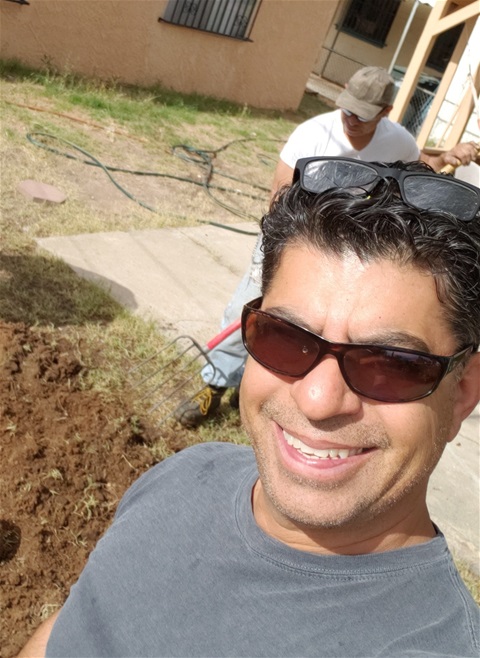 happy May to you, or as they say in the motherland, Cinco de Mayo plus one. I don't celebrate this holiday, and I don't think they even celebrate it in Mexico, it's just a gringo thing to sell beer and chips. I hope you are well and safe and recovering from your hangover if you did have a few too many coronas and lime!

I went to a party at my cousin's for a while, but was home asleep by 10 pm. I have been dealing with an infection on my left eye,and looking out one side of my head most of the week, hence my delay in writing you. It's difficult to type with one eye and the screen irritates my condition even more. In fact this is the third eye infection this year alone, as my weak immune system continues to let me down. To add to the aggravation, the tempuature hit triple digits here in Tucson this week as the hottest part of the year now arrived. I had a huge backyard project scheduled this week, so the 103 degrees did a number on my head and eye! If you have ever worked in those kind of temps before, then you know what the blazing sun beating down on you all day feels like. Still I guess I prefer the dry heat over the nasty, miserable, humid conditions I experianced in the deep south while on tour.

The picture I posted is painted on the side of the famous 'A' mountain here at home. "Red for Ed" stands for education and is the symbol of the local teachers union here in Arizona. The teachers here in my home state just came off a one week strike, and the red represents the colors they wore as they protested their cause. Now as you know I have always strived to maintain a neutral stand with all social, political, and religious causes, but since my big sister is a teacher herself and one of the striking educators, I of course have an opinion.I saw her stress and concern leading up to the work stoppage and then the actual strike. Arizona is a progressive state, with plenty of growth and resources, yet it ranks almost at the bottom when it comes to teachers and support staff wages. These people just wanted a competive wage and just funds for supplies and delapidated schools. The state loses hundreds of teachers each year as they take better paying jobs in other states. Having raised three kids of my own in the publis school sysytem as most of us have, I always felt teachers were some of the most under paid and unappreciated professional in our society. They apparently reached some sort of agreement yesterday, and tomorrow they will return to work, thus avoiding anymore disruption with the kids that seem to get caught up in the debate, and my sister will certainly now get some peace of mind and rest as she reports back to her class in the morning.

I will now also get some shut eye, at least on one side! No pun intended. Thanks for checking in friends, and I hope to have an update with the progress of my book soon! Goodnite!