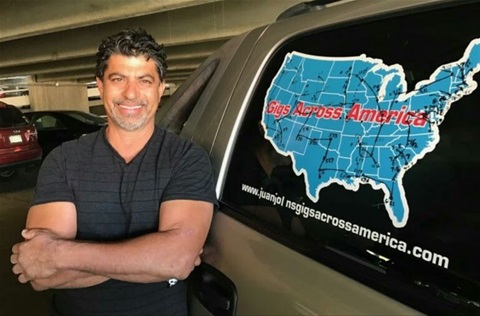 and happy Monday to you. I hope all is well with you and yours. I myself am doing just great and I have plenty to share with you, so I'll get started!

After months of waiting for the manuscipt to be readied for publication, and many more months of trying to decide on a publisher, I have finally made a decision. The Gigs part one will be printed locally here in Tucson, and aviliable on Amazon Kindle sometime late next month or early December. I met with them last week to finilize the printing and E-book formats and cost. I submitted my manuscipt, along with the 30 pictures I want included in the first book. The work Maryann and her husband John did with my writings was excellent, and not too much editing had to be done! It will be over 360 pages and almost 95k words.

I had quite a few out of state publishers hounding me for months, but I wanted to produce my book as close to home as possible. For one, I knew a local company would have far more interest in a story from a home grown writer, and the support in my home town has been amazing from the beginning. Secondly, and more importantly, when it came down to the financial part of the decision, I certainly am getting a better deal here at home, than from those over priced blood suckers who just want to takes peoples money, with very little in return. Yes, I have to do a little more hustling and marketing myself, going this route, but as the lady said last week, I've already shown my ability to sell me story. First by coming up with the idea, creating a website and national following, then reaching out to the media and public in general. She believes I won't have too much trouble selling myself again once the books are aviliable! I'm glad she that kind of confidance in me.

They will also supply me with a list of local and regional book stores that I can contact to market my writings. They will set me up with a booth at the local book here in town in the spring, one of the largest in the country! In the plans already is a book signing event at a local book store once both the E-book and printed copies are ready. That has been one of my most desired dreams since I started writing back in 2013, and now it looks like it's really going to happen for me. I already contacted the Arizona Daily Star and the local NBC affiliate to do a follow up story prior to the books release, in order to create a bigger buzz locally.

My brother's girlfriend, who works for the city library system, has also set me up with an oppurtunity to place my book in a few of the city's branches, along with a display on the front counters. The city librarys also like to feature home grown talent and give them a platform to show their work. I have so many other leads to share with you concerning the project, but I'll share them with you as the weeks go by and they develope.

My website has been simple, as the name sake explains, but the response from you and many others over the past two and a half years has been spectacular! Those of you who have followed me and continued to show interest these long months and years hold a special place in my heart. I also appreciate those who are newer, and have supported me even after the adventure was completed. The road has been long, and I truly appreciate your loyal following, and encouragement throughout! We are almost there guys and gals!!