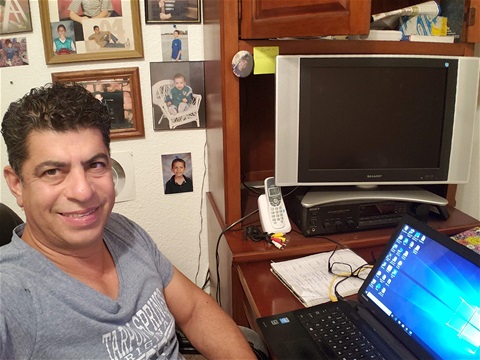 Hello friends,  and happy Tuesday to you wherever you call home.  I myself am doing great, and Kalani as well. I'm actually writing you from my smart phone because my internet here at home is down for some unknown reason. So forgive me for more than the usual errors, my eye sight is not very good on a tiny screen. I promised you updates, so here's the latest!

I've been working on a remodel for the past four weeks, and now I'm ready to wrap it up the next day or so. It's been a long and difficult gig, but it was well paid, unlike many of the jobs I did on my tour! So now I finally have the money to pay Alphagraphics to begin the printing of my Gigs part one. The proof copy should be ready for my final review in two weeks, then once I give the final green light and fork over another chunk of cash, the printer will churn out 500 copies with 30 colored pictures!

They will also upload the book on Kindle as a E-book for those of you online readers! The Kindle version will also include the color pics, and should be available before the paperback editions are released. It looks like the first week of December is the best time frame as of today.

I also spent this past week setting up a tentative book signing event at a local bookstore here in Tucson. For any of you good people who follow me here in town, the Bookman's on Grant has graciously agreed to host my signing day! We're still working out the details, but we're shooting for Saturday the 15th of December. I'm so excited!..and scared at the same time.

On top of that, in my attempt to draw more people to my story, I once again reached out to the media for some more magic, and they happliy responded! I have my third newspaper interview on the 20th of November, with the story of my publication running a week later.

Next I messaged the local NBC affiliate Kvoa and we tenatively set up my third television interview on the 7th,or 8th of December. These entities who have shown interest in my story right from the start, are the main reason why I enjoy such a great following on this site!

I am still working other sources locally and will continue to use the social media links to reach as many people as I can. Nows the time to capitalize and ride the wave, so to speak. It's been a long time coming, and you good folks have stuck with me through it all.  And for that I warmly thank you! We're almost there!