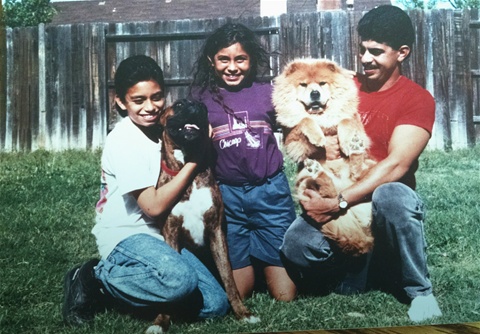 Today I had my 20 seconds of fame, thanks to KGUN 9! They ran a segment on my adventure at the five o’clock news. It was short and sweet, but it got the word out to a T.V. audience. And for that I am grateful to them. Friday I have a newspaper story with La Estrella Spanish paper, and Saturday a short segment with a Channel Azteca talk show. Im trying to get the word out to anybody that will listen!

I also want to thank you, my loyal followers for your support. By the time I roll out of this town on the fifth of May, you might have a change of opinion about me, with all this drama and dysfunction that I’ve been posting about my personal life!

There was so much that happened upon our return from Mexico that night. I couldn’t tell you in 10,000 words if I wanted to. So many details are better left in my now faded memory and are better left unsaid. The end of a marriage, as many of you know is ugly and painful. Ours did not die a slow death, although looking back now, there were plenty of warning signs I chose to ignore. To me it was an overnight collapse! Like a building scheduled for demolition, and my wife held the button. It took me a long time to even be able to talk about it without getting choked up. But now, 28 years later, Im totally good with discussing it. So I will try to put it in a nutshell!

Unbeknownst to me, my wife’s reason for not going on the trip was all a fabrication. She had no intention of leaving for two weeks, she though, was happy that I was! My mate, as I will refer to her now, was involved with someone else and used the time that I was away to plan her escape from the world in which she felt trapped. Not that uncommon, but she devised a plan to break away from me without coming clean about her affair. She told her family lies and half-truths to get them on her side in order to be able to move out of the house. The next six or seven weeks were the most crushing, gut wrenching times of my young life. I was completely devastated! I never saw it coming! Not that way.

There was a series of a back and forth, tug of war saga with my newly discovered nemesis Eddie, and eventually he won the battle for her affections. I was in ruins emotionally and physically. Unfortunately, the kids had a front row seat to the drama and we did not do enough to shield them from all the chaos surrounding them. That to most people, including her family and mine was the most horrible aspect of that event. That a woman would leave her husband, which was not out of the ordinary, even in 1988, but that she would abandon her children, is what shocked them the most. Especially my in-laws. It didn’t matter much to me, I never would have let her take them, and she knew that. The reality is that they were going to be in the way of her new life, and she never intended on taking them from my side.

I went from 155lbs to 130 in a month. I couldn’t sleep, eat or focus at work or with anything else around me. I was a zombie. I was consumed by her whereabouts and sociologically defeated by the feelings of being “out manned” by my younger counterpart. My self-esteem hit new lows I didn’t think existed. What hurt the most, was that Eddie was everything I wasn’t or that my mate always claim to hate in a man. At nineteen, he had a record, smoked, drank heavily, used drugs and fooled around. Yet she preferred him, not me. I couldn’t reconciled that in my mind or heart. I kept thinking that she would one day come to her senses and return back to the kids and me. I never felt such pain. Not even from my abusive father who would beat me and belittle me into submission, left me so crushed. I felt alone in the world.

Fortunately my loved ones came to my rescue. My mother and sisters all rallied around me and helped me with emotional and moral support, and the kids too. I though could not find the words to explain to my eight and six year old kids why their mother was gone. Not in a way that comforted their worried little souls, especially at bed time. After a few weeks of mopping around, my big sister called and shook my #&*^% up a bit. Always the logical one, she was very blunt with me and set me on a better path.

She told me to stop my crying, and to man up! That I didn’t really lose much at all, that my wife had done me a favor, and more importantly, I had gained full custody of my kids! She assured me that the pain would pass and that we were still a family. The fact that my mate chose to depart, did not diminish the family unit, but most likely enhanced it. She lifted my spirit up like no one else could at the time. She proved to be the father I so sorely lacked, especially for times like those. After that conversation, the sun and the sky looked brighter. I was on my way back to normality. Now that is what I least expected to ever be at the age of 26. A single father of two. I had to reinvent myself and be not just a better father but now also a mother to my children. For they too were hurting for their mom.

The first thing I had to rebuild was my self-esteem. That would prove to be a long term project. But as you will find out, I had a lot of help in that department.

I will end there tonight and resume tomorrow with part two.

Thanks for your ear,