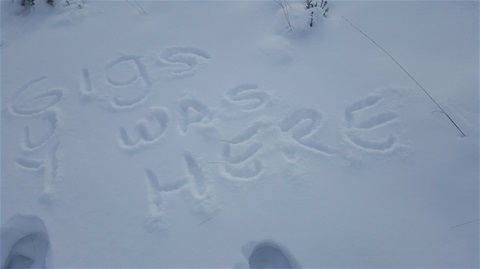 I hope all are warm and safe this Friday afternoon. I write you from the public library in chilly Boise, Idaho where I just arrived last night from Wyoming. The weather has been extreme all over and I was caught up in the mist of it in the small town of Rawlins, WY. the last twenty some hours.

Coming off of the last two official gigs in Montana and Wyoming earlier this week I headed for Rapid City on Monday for another try at that most difficult of all stops; South Dakota. It has become my most frustrating of all stops by far. I first landed on the east side of the state last month in Sioux Falls, only to spend seven excruciating days with nothing to show for all my time, troubles and freezing nights in my truck, on top of that having to suffer the humiliation of being jerked around by some local loser on the phone who dangled a job carrot for three days only to have a good laugh at my expense. Nevertheless I chalked it up to an isolated incident and moved on to Iowa knowing I had a chance to work the west side of the state when I hit Wyoming and Montana. The fuel cost has now become my biggest issue since the states out west are large and the distance between job opportunities require much more gas.

I was happy to complete the last two gigs so quickly but the bottom line is I only netted a total of one hundred dollars between the two stops. Barely enough to cover the fuel cost and allow me to stretch it all the way to Rapid City some 238 miles east again to S.D. Unfortunately when I arrived Monday afternoon I found the job situation much the same if not worse than before. I spent the night hoping for a last minute miracle and even went to the local Labor Express I found on line, for goodness sakes this town doesn’t even had a Home Depot I could have went to try to utilize as I have in other places when times got tough. All my efforts failed once again, the CL, social media and online services all proved fruitless for me again in that job forsaken state! So faced with an impending snow storm and $55 dollars in my pocket, I had to make a tough decision. I could sleep in my truck with temps in the teens but not in single digit cold, and with no prospect of any work on the horizon things looked grim for me to wait it out once again.

After two stops and eight and a half days and nights in the state with no success I bolted west Wednesday morning, the Great Plain states were tough and South Dakota proved to be the worst. I headed for Boise some 865 miles away feeling dejected leaving a state undone but feeling that I had no other option at that point. I don’t know if I will return for a third try but the only solstice I have is that I tried everything I knew and endured plenty of cold, boredom, hunger and stress trying to score a gig in that devil of a place. I still I feel a loss and a bit incomplete even after forty four successful stops.

I regained my focus as I drove to my next destination only to be thwarted this time by the snow and ice in Rawlins, Wyoming. The storm I eluded in Rapid City met me head on in western Wyoming. Interstate 1-80 was closed for the day at noon and I was stranded in there along with hundreds of truckers and travelers for the night until the storm passed and the highway was plowed the next day. Now as you know I have been roughing for the better part of the last eight months so sleeping in my truck, although not the best situation at times, is still not a big deal anymore for me, but I felt bad for the many folks who were forced to sleep in their small cars and trucks in the cold truck stop parking lot unprepared for such an event. The truckers have their cabins to sleep in and most are used to things like that from time to time but most ordinary travellers aren’t prepared for emergencies like the one were forced to endure it for that night in Wyoming. It was just another night for me with this adventure so I dealt with the situation better than most of the stranded folks. The truck stop and restaurant was filled to capacity and I enjoyed sitting with all the road warriors watching movies in the lounge, discussing stories and speculation about the pending road conditions. The next morning at nine am the roads opened and it was a mad dash to the interstate for everyone trying to get to their destinations, including me, it was one for the books!

Now I am in the land of potatoes hoping for better weather and success with work. This is the last state before I get to the Pacific Ocean and I honestly am sick and tired of looking for work, but I have to keep going for five more stops before I could wrap it up in Hawaii. I hope to have some good news next time I write you and another gig under my belt.

Take care, stay warm and thanks for checking in!  #Yo-Ga-Fla