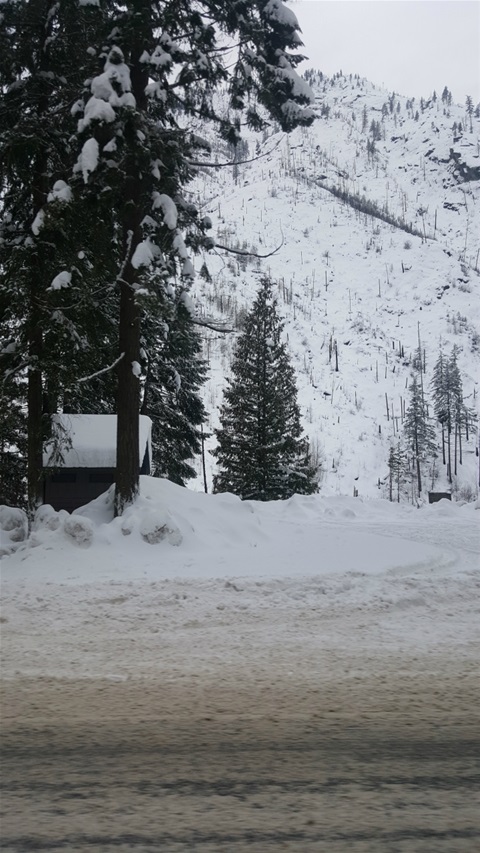 At long Iast I finally have a chance to sit down for a few minutes and check-in with you. I write from the West Seattle P.L. and hope all are doing well this Monday afternoon. I arrived here in Washington State last Wednesday or Thursday night I truly don’t remember which, but it has been a rough few days trying to settle in to my normal routine partly because my always reliable truck stops like Pilot and Flying J’s from which I have been accustom to landing are almost nonexistent here in the Seattle area.

Aside from using the facilities to park and relax a bit in the lounges while I begin my normal job search  I use the shower services, snack bars and laundry room to set up my pseudo home base. Unfortunately for me the three truck stops in this huge metropolitan city are pretty crappy and unfriendly, very disheartening since I arrived from Idaho after a tiring and exhausting trip through hours of ice, snow and blowing winds.  I went to pay for a shower at the Gull in Marysville and the woman denied me service citing that I wasn’t a professional driver. For the first time in nearly nine months of frequenting these drivers oasis I was exposed as a fraud! I explained to the lady that I was a writer working on a book research project and that I had not encountered any problems at any other stop during the last few months. Well no one likes to be singled out and she was no different so she said she would make an exception since it looked like I was telling the truth. I bat my eyes at the Golden Gal and thanked her for her kindness as she handed me the key, whatever it takes on this adventure I suppose!

The overnight parking was no better so I’ve had to go to the nearest Wal-Mart super center to sleep every night since I arrived. Today is also the first day of sunshine here so the reputation of being a rainy climate certainly is true thus far. Seattle is a beautiful city with spectacular views, waterways and vegetation everywhere you look. A good blend of culture and art come together very well from what I have seen. It’s been so wet and cloudy that I haven’t been able to take any good pictures but I plan to do so after I finish up here.

The good news is that it only took me two days to find work and I even turned down a couple other offers as well. I signed up to work on a remodel job just a couple blocks away from this very seat! I also made contact with a nice local fella named Joel who is friends with my friend Greg H. back in Tucson. I plan to help him with some supplemental stucco work before I move on to Oregon next week and then to Nevada again or San Francisco, I haven’t decided yet. I have however decided to make a change in my plans and fly to Alaska from the Bay Area and not here in Seattle as I had planned all along. I will tell you my strategy concerning that state once the time gets closer.

Meanwhile I will knockout Oregon, Nevada and California before heading to Juneau in February. It has been harder and harder to get motivated each day for work truth be told. The  fatigue and physical weariness continue to challenge me by the hour and not enjoying my normal diet also has an effect on my overall condition I believe. I keep pushing forward knowing that once I arrive to my son’s home in Hayward, Ca. that I will rest form the backseat and junk food diet that I’ve been on for months. Anthony and I enjoy the kitchen and grill and he is an awesome cook in his own right! Coincidently his and my teams made it to the Super Bowl in a couple of weeks and I expect to be there to watch the game along with his wife and three boys, I can’t wait!

Well that is all for now friends, I have to go and find the nearest dollar menu to eat dinner. It will be difficult since this city is freak-in expensive as hell! I aslo wanted to inform you that I continue to post new pictures on my Gigs album #3 on the menu and finally was able to download some new videos to share with you. check them out!

Take care and thanks for support and encouragement as I continue forward with this awesome adventure!  #Yo-Ga-Fla